Somehow we got selected to be one of 18 bands in 2 weeks 2 make it 2 a competition where bands get teamed up with film-makers to make a video in 2 weeks. We're with Neil Schcoles and will be shooting on Tuesday 21st November in a huge rehearsal room in South Kirby, Litstructures, used by the likes of Basement Jaxx & Chris De Burgh (OK , so you can't have everything). We're desperate for extras to appear in the video, so if you've nothing better to do between 9am-7pm on Tuesday than hang around an old warehouse, drop me an email!

Well, it wasn't made in South Kirby after all, we ended up assembling an all star cast in a small warehouse in Bradford to shoot a video to "Matty Groves". It all got off to a rather slow start, due to the forces of law and evil pulling me up on a weighbridge for being 10% overweight. 10%? Fascists! Anyway I dumped my two passengers (sorry Sarah & Bona!) and drum kit (sorry Fred!) and made it to Bradford only 3 hours late. Anyway, somehow we managed to get a video made and Neil managed to get it edited & handed in within half an hour of the competition deadline, last Friday. So here comes your bit - the video is now available to view online at Silverwheel Video. The only catch is that to vote you have to buy the Sheffield Star, either on 30th November or 5th December & post your voting form back to them by the 7th December. Yes, very low-tech, I know.

The public screening of the video is at the Sheffield Showroom on Tuesday 12th December at 6.30pm, tickets £4. After that, we'll have it available on our myspace site. 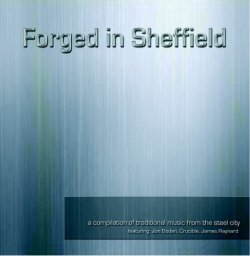 Is a compilation CD featuring the best of Sheffield folk, Hekety, Silverwheel, Rackaback, Minnie Moosika, Glorystrokes, Derwenna, skyhook, Crucible, Box of Shivers, James Raynard, Outre Manche, Richard Masters, Treebeard, Trinculo, Hiraeth, Tegwen Roberts, Jon Boden. The Treebeard track is "Train", a previously unreleased track, which we had started working on for the 2nd album. The Silverwheel track is "Cold Haily Windy Night", which is available as an mp3 from the Silverwheeel website.

The CD is available from our website, the Sheffield Folk website, and direct from us at concerts, for just £10