OK, you may have noticed, I'm not doing news updates here anymore, if you want to keep up with what we're up to, check out Facebook, or Youtube for videos, Flickr for pictures or ReverbNation for general news stuff.

However, I couldn't resist this one, news from our latest Italian tour!

(First published as a ReverbNation blog, with photos from flickr)

OK, while I remember, here's the story of our recent Italian tour with Haze & Treebeard, with special thanks going out to Daniele Castracane for once again doing a great job of organising it for us.

We set off at 7.30am on Wednesday 22nd October, Paul, Danny, Ceri & me in the van with all the gear. Cat, baby Hazel & Mum were flying out from Manchester later in the day. Ceri drove the first leg of the journey, getting us to Dover for 12.30, to find that the 1.15 ferry was delayed by an hour due to the storms the night before. Uneventful, you could even say boring, crossing got us to Calais for 4.45 (having lost an hour to the euro time zone). The next 8 hours were even more uneventful & most definitely boring as we drove across France (4 hours Paul, 4 hours me) to the spectacularly cheap Formula 1 hotel in Bourg en Bresse (Ł50 for b&b for 4 of us). Up at 8 on Thursday for the all you can eat breakfast & back on the road for 10 & heading into more interesting country as we drove via Geneva towards the Mount Blanc tunnel into Italy & up to an elevation of 1300m above sea level. Telling the height above sea level was about the only thing the sat nav was good for, as it got hopelessly lost at Calais & I was too tight to buy the Italian map upgrade (Ł40? pah! I'll use a map!) There's a few rather fuzzy pictures taken through a dirty windscreen on my flickr site:- 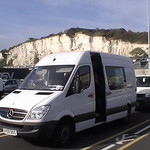 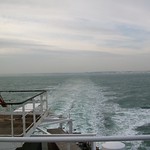 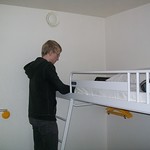 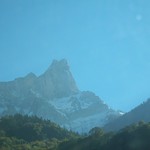 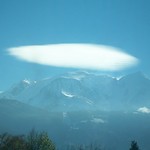 The scenery got less spectacular as we headed into the busy roadworks around Milano, then improved as we turned back north towards Como and the first gig in the Spi Bar, Como. Daniele met us on the way into Como & we followed him to the bar where we met up with Cat, Hazel & Mum, who had arrived the afternoon before. The first gig was a Treebeard show with support from local acoustic band The Mosquitoes in the packed but intimate cellar bar. 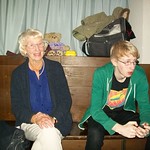 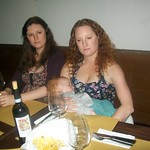 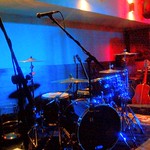 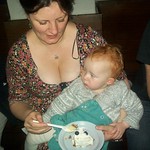 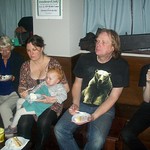 Thursday night's gig at the Spi Bar, Como, started like many Italian gigs, with a great homecooked meal of Polenta (sort of corn mush) and Porcini mushrooms served by Daniele for both bands & a small group of old friends & fans. Mosquitos kicked off the show playing a mix of lively Italian & mainstream pop/rock on 2 acoustic guitars & acoustic bass. Then it was Treebeard, playing a fairly typical set of Fishermans Blues, Losing My Religion, Still Haven't Found, 3 McMahons, Train, This Is The Life, Witches Promise, Firkin Of Mead/Barrister & The Bargast, Farewell To Ireland/Dusty Windowsills, Iris, Stone & The Flute, Russian Medley, One Day Like This. For encores Mosquitoes joined us for a romp through Love The One You're With, Horse With No Name, One, Hurricane & Thank You. After the show we left all the gear in the bar, as Treebeard's Friday night show had been cancelled, so we were due to play the Spi Bar again, but this time as Haze. Daniele drove us back to the Hotel La Locanda dell 'Oca Bianca, a friendly little place on the outskirts of Como. 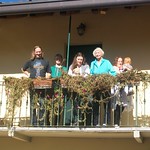 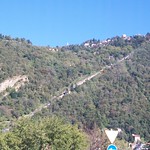 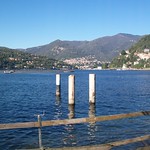 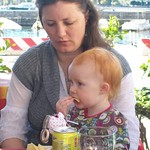 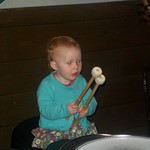 Friday started with us just making it down to breakfast for the 10am curfew, then a rather leisurely hanging around until Daniele came to pick us up around noon & take us back into Como for a days unhurried sightseeing, pace dictated by having Mum & baby Hazel in tow! We made it to the lakeside, but not much further, then back to the Spi Bar to set up the Haze gear and another fabulous meal (Aubergine pizza with the worlds finest olive oil!). Friday night's show was slightly less packed than Thursday, but if anything, more appreciative of the mostly original set. Full set:- The Last Battle, Faces On The Wall, Over The River, Train, Balder & The Mistletoe/Barrister & The Bargast, Stone & The Flute, The Edge Of Heaven. Then an 'acoustic' set of Over The Hills, The Em tune set, Mr Rock & Roll & Matty Groves, and back to the Haze - Fallen Leaves, Survive, The Awakeners, The Snake, Dragon Fly, Seven Stones & The Vice. We packed the gear down, but left it in the venue to load the next day, headed back to the hotel for a last night in Como, before heading for Milano on Saturday. 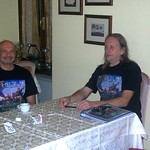 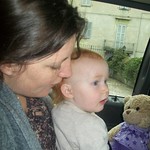 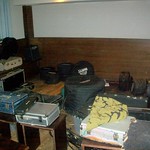 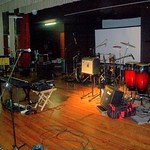 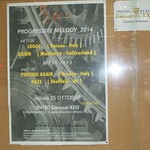 Saturday morning & time to head for Milan! This is the 'big' gig of the tour, a four band progressive rock festival featuring Dawn, Logos, Phoenix Again with Haze headlining. Billed as Progressive Melodie 2014 it was held in Teatro Giovanni, a large theatre in Cusano Milanino, a northern suburb of Milan. We got there about 1.30pm to find lots of stuff already set up on the large stage, loads of keyboards including an old Hammond organ & minimoog - these guys take their prog seriously! All the bands were sharing Dan's kit so we set the drums up first & set our gear up off to the side of the stage. Soundcheck was thorough but very time consuming & I still haven't got used to sound engineers wandering round the hall & stage mixing on a tablet! After soundcheck we headed to the hotel for a much needed shower, then back to the gig to catch the end of Logos set of keyboards-heavy accomplished prog. Dawn followed, again with 2 keyboards players. I hardly ever listen to prog these days, so it was quite nice to hear some new original stuff. There was then a short break before Phoenix Again, so we headed to a local bar for food & drink. The whole gig was running very late & we were all pretty tired when we finally got onstage around 11pm. I video'd the show from the back of the hall & recorded the sound direct from the desk, we all look very small, but I've put some of it on youtube already. The full set was:- The Last Battle, Faces On The Wall, Over The River, Balder & The Mistletoe/Barrister & The Bargast, The Edge Of Heaven, Survive, The Load, Long, Long Gone, The Red Room, The Awakeners, The Snake, Dragon Fly, Seven Stones & The Vice taking us to 1am! It was great to meet so many friends & fans old & new after the show, despite the rather low overall turn out. It seemed to take forever to get the gear out, but Paul, Daniele, Ceri & me still managed to stay up for a last drink in the hotel bar 'til 3am, well Daniele stayed up for another one with the barman 'til 4pm. It's only Espresso that keeps him going! 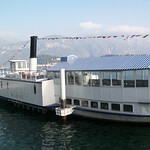 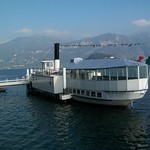 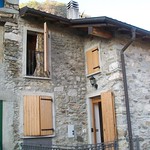 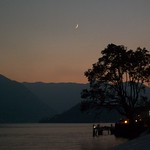 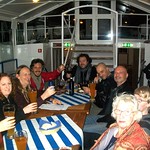 So getting up Sunday morning was never going to be easy. Putting the clocks back an hour helped, Daniele not realising & calling us at 9am didn't! The final gig of the tour was on the Bisbino, a boat permanently moored on Lake Como at Tremezzo, about 45mins drive north of Como. So we headed out from Milan, stopping at a shopping centre to pick up gifts/souvenirs etc. up via Como, arriving very tired (again!) at Tremezzo around 2pm. We were early for the set up so we went to the accommodation, a small villa way up, and I mean way up, the mountainside. Lake Como is about 200m above sea level, but the accommodation, barely a mile from the shore was 750m above sea level! That was some seriously windy road! The usual hours siesta & we were back down to the gig, a two part affair. First we played as Treebeard out on the deck at 6-7pm to a handful of fans & a few bemused tourists, then we set up in the front cabin of the boat alongside the Luka Zotti Band & settled down for tea. I was feeling pretty lousy by this time, headache caused by tiredness & dehydration - I'd even sat down for part of the Treebeard set! - so I went for a quick kip in the van. Luka Zotti kicked off with a great set using his home-made guitar/keyboard/drum machine hybrid (https://www.facebook.com/lukazotti) then Haze played:- The Last Battle, Over The River, Balder & The Mistletoe, The Load, The Awakeners, The Snake, Dragon Fly, Seven Stones, Dig Them Mushrooms, Stone House, followed by The Luka Zotti Band joining us for a Pink Floyd set of Time, Brain Damage, Eclipse, Comfortably Numb, encoring with Another Brick In The Wall. All in all a great way to end a fabulous tour! 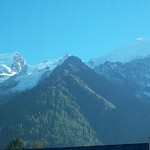 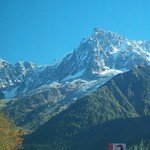 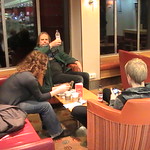 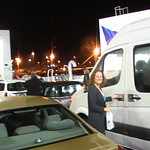 Monday morning was predictably hard to face, we set off from the villa around 8.30am, dropped Mum, Cat & Hazel off at the Spi Bar in Como for Daniele to take to the airport in the afternoon, while Paul, Danny, Ceri & I set off for the long drive home. I took the first 4 hours freewheeling through the Mount Blanc tunnel in order to get to France before filling up (Diesel is cheaper in France, more expensive in Italy), and handing over to Paul near our first night's stop in Bourg en Bresse. France was as dull as before. I took the last couple of hours drive to Calais, getting us there for 10.45pm in time for them to check us for illegals & board the 11.15 ferry. Ceri took the wheel for the UK drive, which went well until the M1 was closed at Jn15a nr Northampton. We got taken some crazy detour into the middle of nowhere (well Kettering) before finding our way back to the motorway & making it home for 4.30am rather than the anticipated 2am. There's some great pictures from the Milano show on Alice Bellati's Facebook  some grainy pictures of mountains and more videos to come.
Here's to the next one!